WATCH: There are still no answers as to who is responsible for dumping several bags of styrofoam packaging in Thetis Lake Park on Tuesday evening. But as Luisa Alvarez reports more witnesses are coming forward.

On Wednesday, Thetis Lake Park goers were shocked and unhappy to discover multiple large garbage bags filled with styrofoam dumped by the trail. After looking at the labels and barcodes on the pieces, witnesses say they are from home appliance packaging.

Contractors typically have to deal with steep recycling fees. But Kerriann Coady with the Canadian Home Builders’ Association says that’s typically accounted for in each job.

“The fees are widely known so they are always embedded into the projects, it really isn’t an excuse for dumping the waste where they did.”

And appliance stores spend upwards of $3,000 a month to put the material into bins and have professionals take care of it.

“It could only be a very irresponsible individual doing something like that I cannot see any business doing that,? said co-owner of Westcoast Appliances Fred Aram.

An eyewitness to the dumping says he was walking by when a white truck without a label that he could see was parked making a lot of noise as two individuals unloaded the bags.

? It was a man, maybe 40 years old I think, he had a beard and then this woman that was in the back of the truck came forward because I was asking what he was doing she came forward looked around she looked probably the same age,? said Bernie Schafer.

Schafer was curious about what the noise was. He asked around and found out the type of truck he saw was one that blows insulation into peoples’ attics.

?It compacts it and comes out in smaller quantities,? said Schafer.

Schafer adds that the two people were very calm and seemed as if they did not care if anyone saw them.

“They were so brazen about the whole thing dumping all that stuff and making all that noise it seemed like they didn’t do it secretly,” Schafer said.

Residents in the area say sadly, dumping in that park is not rare. The styrofoam has since been cleaned up and the CRD along with the West Shore RCMP continue to investigate the incident. 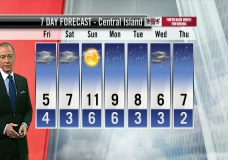 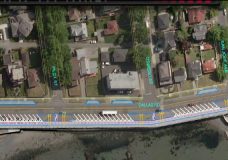