If you’ve seen the Campbell River lately you may have noticed how one side of the river is clear and dark while the other side is distinctly brown and dirty.

The turbidity is coming from the Quinsam River that joins the Campbell River near the Elk Falls Provincial Park campground.

Hack recently flew a drone above the river to record the convergence zone of the two rivers and was surprised to see how distinct the line between dirty and clear water is from the sky.

“I was also really surprised to see the contrast last so far down the river,” he added. “You can see it right where they converge but it lasts for almost a kilometre down and you can really tell that from the sky.”

When he posted the drone footage on social media it soon caught the attention of The Weather Network which did a feature story on it.

BC Hydro has three dams on the Campbell River system and dams on four other river systems on the island.

Spokesperson Stephen Watson says the dams contribute to the stark difference where the rivers meet.

“It’s a bit of real contrast in terms of the BC Hydro systems and our reservoirs and how rainfall comes into the system and how the turbidity settles by the time water is released downstream,” said Watson. “When it’s released it’s still very clear and clean when you compare it to unregulated natural rivers like the Quinsam that come in with high turbidity or dirty water.”

Rivers unregulated by dams also have a more natural curving flow where sediments are eroded from riverbanks and carried downriver.

Hack says he never expected the photos and video to garner so much attention.

“It’s pretty exciting but it’s also pretty exciting to show Campbell River and Vancouver Island in general,” he said. “I love living here and loving showing off where we live.”

You can view some more of Michael Hack’s photography collection here. 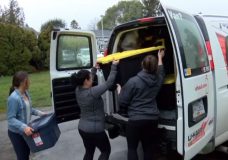 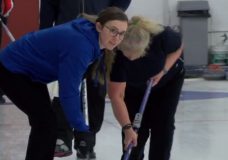 'We all cheer for each other;' Victoria athletes well-represented at 2020 BC curling championships