Grandchildren are always welcome at James and Margaret Bailey’s Sooke home but the family installed a doorbell camera a few months ago for other visitors.

“If a guy delivers a package you can unlock the door with it remotely and he puts the package inside and you see him leave and you can lock it again,” James Bailey says.

But the Baileys were shocked at what the camera captured this week.

“When I got up, we had a lot more alerts on the phone than we normally get,” Margaret Bailey explains.

Margaret checked the footage right away.

“It was very foggy and misty,” she says.

But nothing was there — at least at first.

“And all of a sudden out of the mist came a little light, and then another light and the light turned out to be eyes,” James recounts.

An eerie image approaches from the fog…

“I honestly had no idea what it was,” says Margaret. “I was just like, what the heck? That’s not a deer!”

Margaret wonders whether it could be an elk and then, there’s a second one.

“And it wasn’t until the second one, I said, it’s a cow!!” Margaret exclaims.

“There is one great big cow and she brought along a friend!” Margaret says, laughing. “I guess maybe he was trying to say hello to the camera?”

The curious cows may have come visiting from the farm across the street.

“We’ve never had anything at the doorbell like that before!” James says.

But how the breakaway bovines got out — and why they came over in the middle of the night — is a moo-stery.

“One would think they would be sleeping, right, at 2 o’clock in the morning!” a baffled Margaret says. “I just thought it was the most bizarre thing I’d seen!”

The Bailey’s sent the video to CHEK News, figuring people would get a good chuckle out of the cow caper. 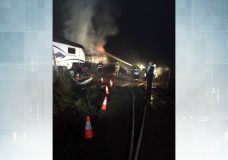 Fire in Coombs the third in as many weeks, says Fire Department 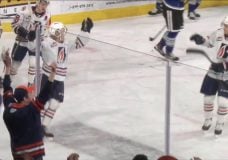