Posted: Dec. 20, 2019 5:49PM
CHEK
WatchA timeless holiday tradition that's been running for 40 years in Ladysmith, is expected to bring out hundreds of families and excited kids Sunday for the Santa Claus Parade. As Skye Ryan reports, the very special Mr and Mrs. Claus at the centre of are devoted to making it a night no child will forget.

By day he’s a modest truck driver, but come Christmas, a Cowichan Valley man is believed by hundreds to be the real big man in red.

“Ho, Ho, Ho everybody,” said the Santa from his Duncan home.

He’s now preparing to bring a magical night to a forestry town that needs it.

“When things may not be going very well,” she said.

It comes nearly six months into a strike that’s left thousands out of work.

And Santa just may be able to help.

“I look forward to this every year,” he said.

He is widely believed to be Santa in the area, and is dedicated to the hundreds of children who come to see him year after year at the Ladysmith Fire Rescue Santa Claus Parade.

“He just masters it,” said Ladysmith’s Fire Chief Ray Delcourt. “Yeah this is Santa Claus, this is our Santa Claus.”

“To believe that there is a Santa Claus,” said Santa.

At a time it may be needed more than ever.

“Yeah they’ll probably ask me can you get my Dad back to work,” said Santa. “I don’t know what I’ll say there.”

But if anyone understands surviving a tough time, it’s this big man in red, who was raised to love Christmas from a young age, by his mom.

“And she was kind-hearted and so was my dad,” said the 55-year-old.

“My dad passed away at a young age and she had to take care of six boys and one girl and she did a good job,” he said.

So when this Santa, shows up Sunday to bring a bit of Christmas magic to children, he’ll be living proof they can get through this. His wife says he really believes in the magic of Santa and you see it on their faces.

A legacy from that Christmas loving mom, that our Santa lost just a few months ago, whose gifts learned in hard times continue to be shared. 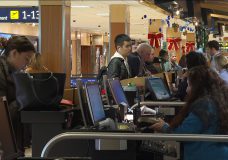 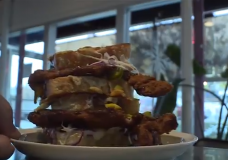