British Columbia has reported 761 new cases of COVID-19 across the province in the last 24 hours with 8 additional deaths in that span.

Also on Thursday, Dr. Henry revealed that the current public health orders restricting gatherings and events have been extended until February 5.

Of the 761 new cases, 23 are linked to the Island Health region. The 23 additional cases in Island Health comes one day after a new daily record of 28 cases were announced within the authority.

There are currently 6,349 active cases in British Columbia, while 8,849 residents remain under active public health monitoring.

Dr. Bonnie Henry says that 372 are in hospital currently – a decrease of seven from Wednesday – with 74 people in critical care as a result of the virus (a decrease of four).

On Thursday, there were 8 additional deaths related to the virus. This brings the provincial death total over the course of the pandemic to 970.

As of Thursday, the total number of cases in British Columbia over the course of the pandemic has been 56,015.

Dr. Henry notes that there has been one new health-care facility outbreak at the Ts’i’ts’uwatul’ Lelum assisted living facility in Duncan – with more details released by Island Health earlier on Thursday.

There are now 51 active outbreaks in long-term care and assisted living and ten in acute care facilities.

Dr. Henry also took a moment to address the current provincial health orders in place that have put limits on gatherings and events across the B.C.

She noted that over the last few days there has been a slight increase in the daily COVID-19 numbers being reported in the province and has opted to extend the current restrictions, which were set to be lifted on January 8.

Now, restrictions on gatherings will remain in place until at least February 5.

“Now is our time to stay the course. We know what we need to do to bend that curve back down. We have been successful in doing that prior to this winter break and we need to do that again,” she said.

This means the same requirements that have been in place – limitations on gatherings in people’s homes, the suspension of events in public and private venues, and the restrictions on sports activities – continue to apply.

“This is our winter, but we know spring is coming.”

Dr. Henry also called on British Columbians to reach out virtually to loved ones and spend time connecting in order to support each other through this time.

As of Thursday, the health authority had 152 active cases, which marks an increase of 10 in the last 24-hour period.

Over the course of the pandemic, the Island Health region has reported 1,050 cases. 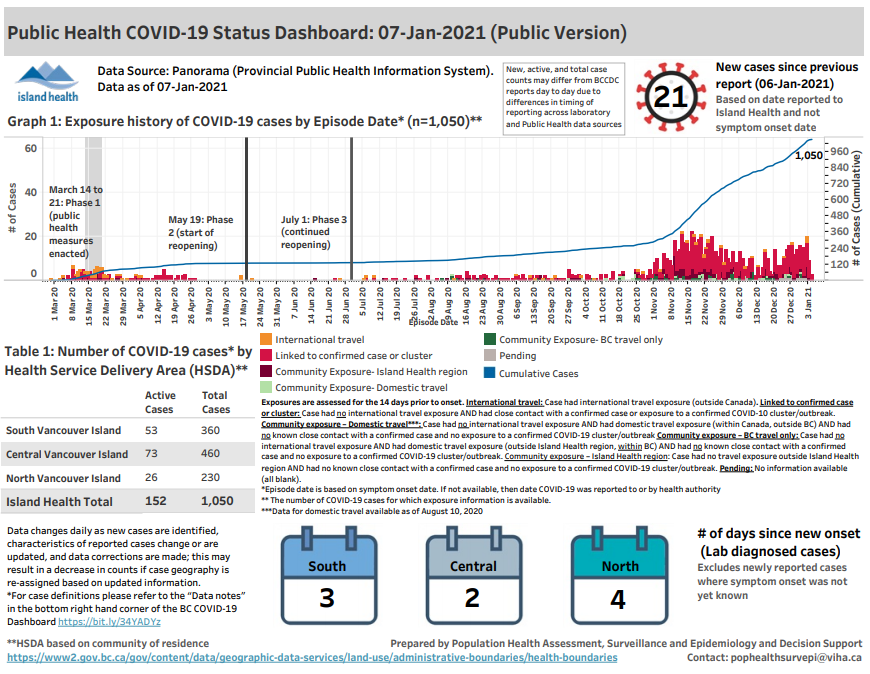 During Thursday’s briefing, Dr. Henry gave a brief update on the new U.K. variant of COVID-19 that was discovered here on Vancouver Island.

The provincial health officer said that since the one person was diagnosed with the new variant, they have been self-isolating, however, two additional cases have been detected.

Both of these two new cases are household contacts of the original case and Dr. Henry says she doesn’t believe anyone else is at risk of this variant.

“I will also say that we have been continuing to do surveillance and testing on people who have travelled as well as a selection of people from around the province on an ongoing basis and we have not yet found any other cases of this variant in B.C.,” Dr. Henry said on Thursday.

On Thursday, Dr. Henry revealed a slight change in how health officials will be reporting the daily case numbers moving forward.

The changes are in an effort to streamline the reporting of data to be more efficient for health authorities and the BC Centre for Disease Control.

The new system will automatically report lab-confirmed cases from the previous day, plus reconciling with the health authority cases to provide more timely reporting of data.

This will create an adjustment period, according to Dr. Henry, reflecting higher numbers in the coming days as the new system kicks in and the data lag is eliminated.

“What remains the same is that every case is still counted and every person who is positive is still notified as soon as possible,” noted Dr. Henry.

Health officials will also be providing weekly vaccination updates, specific to each authority. 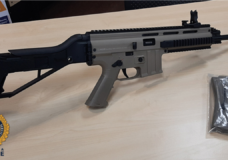 Loaded rifle, fentanyl & other drugs seized by VicPD during search 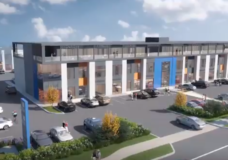