Posted: Dec. 18, 2019 6:55PM | Last Updated: Dec. 18, 2019 11:08PM
CHEK
WatchA Ladysmith boys hero is his neighbourhood garbageman. He waves and smiles at him everyday. So as Skye Ryan reports, in the spirit of Christmas, that goodhearted garbage man did something this week that's touching everyone who hears it.

Tim Denhartigh looks forward to one Ladysmith house every time he gets near it on his garbage route.

The 24-year-old knows a very special boy will be waiting and waving.

“Yeah it puts a smile on my face every time I go by,” said Denhartigh, a Waste Connections driver.

“He runs to the front and waves to me twice then runs to the back and waits for me there.”

The garbage truck driver first noticed this little boy appear at the window in March.

“He was so happy and the cutest little guy,” said Denhartigh.

The boy’s mom Brianne Carnegie said that’s when her family moved into the house.  Her three-year-old son Carson has been eagerly watching and waiting for that garbage man and his truck ever since.

“And every time he waves and honks at him,” said Carnegie

Carson and Denhartigh were complete strangers until Tuesday.  Then Denhartigh decided to deliver this little boy a Christmas gift he’d been planning for months.

“It’s that time of year. Put a smile on somebody’s face,” said the Duncan man.

“I was just, I was tearing up it was just… I was kind of shaking,” said Carnegie.

“I couldn’t help but smile myself,” said Denhartigh.

“And I was just super happy to make his day kind of like that.”

Carson now knows his hero’s name is Tim, and during a surprise visit by the driver on Wednesday, he even wished him a Merry Christmas. 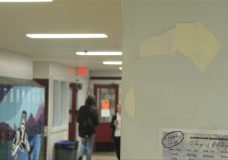 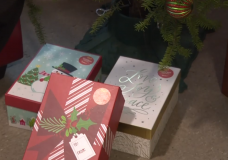