October 2, 2020 updated
CHEK
WatchFor Tanya Bub, this is no ordinary art piece. It's a labour of love and a tribute to Takaya, the lone wolf from Discovery Island who was featured in several documentaries and became known worldwide.

Victoria driftwood artist Tanya Bub called the shots Thursday morning as she rallied a group to help move a precious piece of cargo.

For Bub, this is no ordinary art piece. It’s a labour of love and a tribute to Takaya, the lone wolf from Discovery Island who was featured in several documentaries and became known worldwide.

Takaya was shot and killed by a hunter earlier this year.

On Thursday, Bub transported her Takaya driftwood tribute from her home in Victoria’s Fairfield neighborhood to its new location in the lobby of the Fairmont Empress Hotel in downtown Victoria.

“She has captured Takaya in driftwood which I would not have believed possible,” said Cheryl Alexander, author of the book Takaya: Lone Wolf.

Alexander has documented Takaya for over six years and played a key role in helping Bub bring her vision to life.

“It’s a true, deep, quite emotional collaboration,” said Bub. “She told me that he loved sunsets and sunrises, she would often find him on beaches where he could see the sunset and sunrise.”

The two worked together from the start. They even took a short boat ride to Discovery Island in order to gather driftwood for the project, adding an extra personal touch.

“We went to the places where I knew Takaya spent a lot of time,” said Alexander. “He continually roamed the beaches and he probably actually stepped on the wood that we collected.”

Bub went down to the smallest detail, even capturing the red coloring on Takaya’s ears. No paint was used, so she got creative.

“So there’s shell in his face, quite a bit of kelp. I really wanted to bring him back.”

The piece titled Takaya: Larger than Life is on display in The Fairmont Empress lobby until Oct. 24, giving people a chance to learn and appreciate the lone wolf’s legacy on Vancouver Island. Bub’s Takaya project will then make a brief stop for an exhibit at Victoria’s Nootka Court, followed by lengthier stay at the Bateman Foundation Gallery of Nature in Victoria. 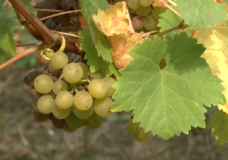 Island winemakers optimistic about the year as grape harvest starts 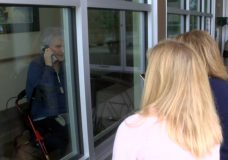