FOND DU LAC, Sask. — Investigators say a passenger plane that crashed in northern Saskatchewan left a path of wreckage almost a quarter of a kilometre long through trees and across the ground. All 25 people on board survived, some with serious injuries, when the twin-engine ATR42-320 went down close to the Fond du Lac air strip after taking off on Wednesday night. Previous reports have said there was no explosion or fire. The Transportation Safety Board says its team of investigators has recovered the plane’s flight data and cockpit voice recorders. West Wind Aviation has grounded its other ATR aircraft for the time being. The board says it will continue to gather more data in the coming days and weeks and interview witnesses to determine what happened. “Investigations are complex and we take the time needed to complete a thorough investigation,” the board said in a release Friday. “It is important not to draw conclusions or speculate as to causes at this time. There are often many factors that can contribute to an accident.” First Nations chiefs say the crash demonstrates the need for upgraded runways and all-season roads in remote communities. Fond du Lac Chief Louie Mercredi said his community has one of the shortest runways in northern Saskatchewan, even though the size of planes using the airstrip continue to grow. Mercredi said they could also use an all-season road so people would have a choice about whether they wanted to fly or drive. “We as leaders need to sit down with the province regarding all-season roads and upgrades to our runways,” Mercredi said. There is an ice road in the winter, but the chief said many people still fly. Chris Jobb, a vice-chief of the Prince Albert General Council, said similar concerns need to be addressed in other remote Saskatchewan communities such as Wollaston Lake and Hatchet Lake. — With files from CKBI The Canadian Press 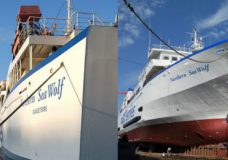 New BC Ferry to undergo major upgrade at Esquimalt Drydock