February 16, 2021 updated
Province of B.C.
British Columbia health officials have reported 1,533 new cases – including 58 cases in Island Health – and 26 deaths from COVID-19 since their last update on Feb. 12.

Of the new cases, 392 were recorded in Vancouver Coastal Health, 856 were in Fraser Health, 58 were in Island Health, 92 were in Interior Health, and 135 were in Northern Health.

There are currently 4,189 active cases in the province, 231 people in hospital —  74 of whom are in intensive care — and  7,136 people under active public health monitoring due to possible exposure to an identified case.

Additionally, there are 15 active outbreaks in long-term care and assisted living and six outbreaks at acute units, involving 561 residents and 349 staff members.

According to the BCCDC’s website, there were 20 new cases of COVID-19 identified in the Island Health region over the past 24 hours.

There are currently 16 people in the Island Health region in hospital due to COVID, seven of whom are in intensive care.

Meanwhile, a total of 597 new tests have been performed in the region in the past 24 hours.

Over the course of the pandemic, there have been 2,009 confirmed cases on Vancouver Island, 1,806 recoveries and 22 deaths. 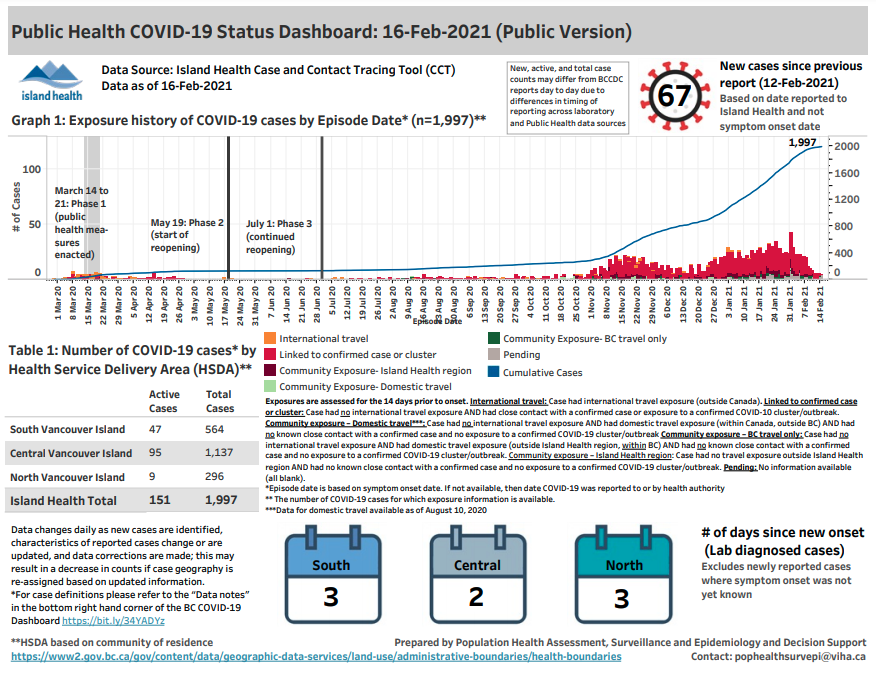 During Tuesday’s update, Dr. Bonnie Henry, the provincial health officer, said deliveries of the Pfizer vaccine have resumed in British Columbia, with some arriving already.

“This is encouraging,” she said. “Our supply still remains somewhat limited and we need to continue to build our program as more supply comes in and we have more stability in the arrival of the vaccine over the coming couple of weeks and into March.”

Henry acknowledged that there have been some “short” delays due to poor weather in the United States and Canada. She also said the focus remains on providing the vaccine to those considered to be at the “highest” risk, residents and seniors in long-term care.

British Columbia has slowly seen the number of daily infections of COVID-19 drop from over 700 cases per day to around under 500 new cases in a matter of weeks.

However, daily infections continue to hover around the 300 to 400 mark, which Dr. Henry, said on Tuesday, was still far too high.

“While the overall number of new cases has slowly been coming down and is lower than it was a few weeks ago, it is still very high, much higher than we want it to be, and we are also, once again, seeing increases in some regions, more than others,” she said.

Henry said while cases are stabilizing and “starting to be managed” in both Island Health and Interior Health regions, many communities in the Northern Health region are still experiencing “challenging” times. She expressed concerns about a rise in cases in higher population centres on the Lower Mainland.

“We are starting to see an uptick and what we see in terms of cases today reflects what has happened as long as two weeks ago,” she said. “So what we have started see in the last week is the seven day rolling average … the number of cases has started to creep up, particularly in Fraser Health.”

Henry said recent data suggests many in the Fraser and Vancouver Coastal health regions are not having as many safe interactions as they were before.

“We are not having those safe interactions as much as we need to be, we need to reduce the transmission events that have been happening in our community,” stressed Henry. “Once we start to see increases, they rise very quickly and then we go back to playing catch up again.”

“What we do today, affects what is going to happen next week and the week after,” she added.