WATCH: 68 year old Rory McConkey died in July after an 8 year battle with prostate cancer. Ashes of the former BC Ferries Master Mariner were cast off from a beach in Qualicum Bay last

Monday was a beautiful day at Sunny Beach in Qualicum Bay, the kind of day that Rory McConkey would have loved.

McConkey was a Master Mariner who worked up and down the coast and with BC Ferries for the last 30 years. He died in July after an eight year battle with prostate cancer but it was at Sunny Beach during a Celebration of Life last week where he set sail for the last time, in a miniature ferry.

“It’s fitting that he’s put out to sea, that’s where he spent all his life.” added Norm Ralkie.

It came as a surprise when a friend from Alberta arrived with a homemade miniature ferry at the Celebration of Life. They put some of McConkey’s ashes in it along with an unopened bottle of Jameson Irish Whiskey and pushed him out to sea.

“Unopened, yup,” said his friend Debbie Ralkie. “So that everybody who found it could have a shot and then put it back in for the next person to have a dram.”

The Celebration of Life was last Thursday and already the “ferry” has made its first stop. A man doing beach cleanup on Denman Island found it Sunday. He’s promised to make it even more seaworthy with fibreglass and set McConkey off once again.

He says he’s not a drinker so the bottle is still unopened.

Rory’s friends don’t expect the ferry to sail for very long. They laugh when they say maybe it will be hit and be sunk by a BC Ferry. 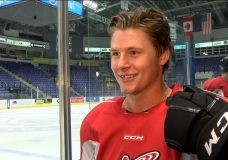 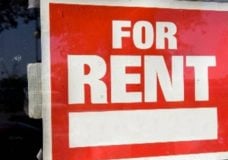