September 28, 2020 updated
CHEK
WatchA head turning sight in Campbell River today, as a controversial anti-mask rally gathered in protest of COVID-19 measures. It didn't gain the numbers that some hoped and other feared though. Skye Ryan reports.

British Columbia has no mandatory mask policy, but that didn’t stop one group from rallying against the idea and the very thought of the government telling them what to do on Sunday.

Approximately 20 supporters of a movement dubbed Hugs Over Masks gathered at Robert Ostler Park in downtown Campbell River, hugging each other and protesting the very thought of being forced to wear masks.

“Everybody hugged,” said Matthew Rose, one of the attendees and a supporter of the movement.

Rose said the low turnout was likely because of the backlash organizers received online. He said people need to come together right now and hopes the anti-masker movement that has grown in popularity throughout the United States and elsewhere, spreads through Canada.

“We’re in a revolution right now and I think a lot of this has to do with what’s going on,” said Rose, later adding. “I think people need to come together in times like this.”

Rose’s comments are exactly the opposite of what health officials are urging, as coronavirus cases continue to rise nationwide.

Karyssa Mills, a local resident and healthcare worker, was shocked when she saw the protest, calling the whole scene disheartening.

“I work in the health industry and I’ve been working in it through the whole pandemic and it’s definitely a serious matter for sure,” she said.

“I mean people are dying from this.” 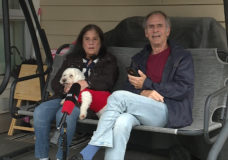