WATCH: White supremacist posters circulating on UVic’s campus are raising serious concerns. The posters have since been taken down. Isabelle Raghem reports.

“There’s kind of thread of that behaviour that’s been running through universities as of late for quite a while but it’s definitely disheartening to see it here,” says Calvin.

“As a Jewish student, I’m surprised to see something like that,” explained Misha.

The poster reads ?(((Those))) who hate us will not replace us? and provides links to alt-right websites.

They were spotted last week inside the university’s Cornett Building. They have since been taken down.

Tyson Stranlund of the group Anti-Racist Action UVic says they received the image from a student and shared it on social media Wednesday.

“It’s very troubling to see,” says Strandlund. “These are obviously designed to both audiences that are receptive to them and sort of as a fear tool. It’s very concerning that any student should be left feeling uncomfortable for something like this.”

B?nai Brith released a statement Thursday calling. “This brazen outburst of far-right anti-Semitism at a Canadian university is a serious concern.?

The statement reads: “the triple parentheses are frequently used by online neo-Nazis to identify Jews, while the slogan itself is reminiscent of white supremacists who chanted, ‘Jews will not replace us!’ during their infamous torchlight rally in Charlottesville, Va.”

?It is imperative that university officials do whatever they can to identify and discipline the culprits,” Michael Mostyn, CEO of B?nai Brith Canada said.

The Congregation Emanu-El Synagogue is also condemning the messages.

“The white majority is not being threatened,” says Rabbi Harry Brechner, “This is a twist of all kinds of logic and it’s just ugly hate.”

“The Jewish community might this time be the target but it’s really the values of all of the Victoria that’s targeted.”

Back on campus, Strandlund says while he’s happy the posters have been removed, he doesn’t want the incident to be forgotten.

“Many people still believe Canada is a generally accepting, multicultural sort of society that’s it’s often been painted… but these racist elements are very present and growing in fact.”

The Anti-Racist Action group will be holding a public meeting on Nov. 15 to discuss anti-racist strategies.

B?nai Brith Canada has been in contact with university officials regarding the situation.

In a statement, the University of Victoria says, to date, it has not found any connection between the incident and any university group or member.

The investigation continues but anyone with information is urged to contact the office of Equity & Human Rights (EQHR) or Campus Security Services. 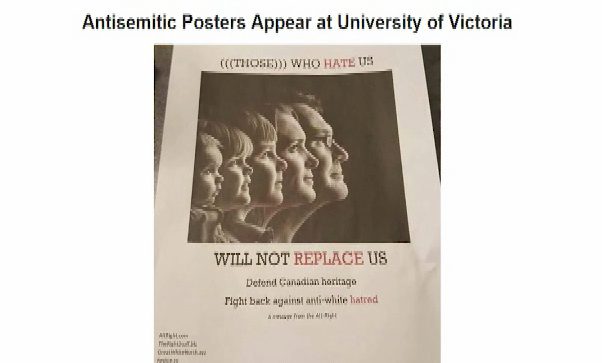 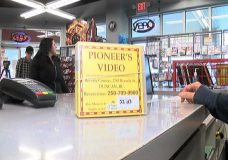 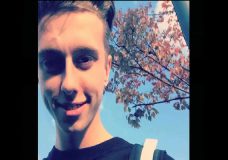