WARNING: Elements of this story depict assault and may be disturbing to some.

The man who uses multiple aliases and who some women say is a Netflix-level con artist, is now in custody, facing three assault charges in Victoria after a year of avoiding arrest.

In February of this year, a trio of women came forward telling CHEK News of the alleged psychological, physical, and emotional abuse they received at the hands of Kyle Balonjan, who they say, preys on vulnerable women.

“He likes to bite, I don’t know why but he took a chunk out of my back…He beat me so hard I lost hearing in my right ear for about six months,” said another.

Those allegations have not been proven in court. What has been proven, is that 43-year-old Balonjan is known to use aliases.

“This guy that I’d known that I thought his name was Giovanni Zizzo, turns out, that was not his name,” said one of his alleged victims.

According to B.C. Court Services Online, Balonjan is documented to go by the aliases Giovani Zizzo, Kyle Moro, and Justin Moro.

For more than a year, Victoria Police have had a warrant for his arrest for an assault and theft under $5,000 dating back to October 31, 2021.

As of last week, Balonjan is back in Victoria. He’s now in custody facing two new assault charges. The most recent took place last week where Victoria Police say he held a woman hostage.

On the night of Tuesday, Nov, 8, after hours of negotiating, Victoria Police arrested Balonjan for holding a woman against her will in a downtown condo after responding to a report of ongoing threats and assaults.

“Officers arrived and determined the woman was unable to leave the condo and was there with a male who was also barricaded inside the condo,” said Healy.

Crisis teams spent hours negotiating to get the woman out safely, then GVERT officers blasted a noise-making device pressuring Balonjan into surrendering.

Balonjan remains in custody. He makes his first court appearance Friday when he’s scheduled for a bail hearing.

“The crown has indicated to the court that we will be seeking his detention on these charges,” BC Prosecution Services told CHEK News in a statement.

Meanwhile, Balonjan is still facing charges which are decades old in Hamilton, Ontario.

“Kyle Balonjan is wanted with the Hamilton Police Service. As to the specifics of the investigation and the outstanding charges, no further information will be released at this time,” Hamilton Police told CHEK News in February.

Hamilton Police didn’t respond to CHEK News’ request for comment on if they would be requesting Crown in Ontario to bring Balonjan to face charges there. 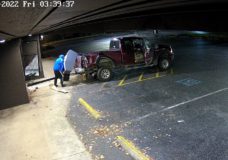 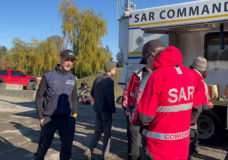