A baby was in a truck with an alleged drunk driver while she was slamming into parked cars Sunday night in Langford, according to West Shore RCMP.

Police responded to a report of a possible impaired driver swerving and running into parked cars in the 2300 block Sooke Road around 10 p.m.

Two women and a one-year-old baby were inside the truck and witnesses helped officers point out the driver.

The baby was strapped into a car seat, RCMP said. No injuries were reported and the Ministry of Children and Family Development has been notified.

The woman who was driving the truck was found to be over the legal limit after a breath sample was taken. She was issued a 90-day roadside prohibition. Police have not released her name at this time.

The vehicle was impounded for 30 days.

Police say there will be an increase in road blocks and sobriety checks during the holiday season Drinking and Driving campaign across the region. 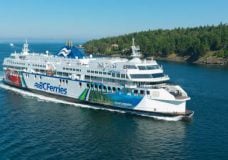 Smoke-free environment in effect next month at BC Ferries