BC Ferries has cancelled all remaining sailings on the three major routes Sunday night.

Passengers at Swartz Bay looking to get to Tsawwassen were stuck in a holding pattern after all sailings after 9:00 a.m. were cancelled.

Massive line-ups @BCFerries Tsawwassen terminal as people try to get refunds after the rest of today's sailings from #yvr to #yyj were cancelled. No ferries have have run between #SwartzBay and #Tsawwassen since 9 am.
More https://t.co/7y6knNpDg1 #BCStorm pic.twitter.com/AaECYIm6KK

Strong winds was the reason given by BC Ferries for the cancellations. Gusts of over 70 kilometers an hour have hit the Georgia Straight.

“We’ve had basically, especially in our marine forecast regions of the straight of Georgia, we’ve actually had gale force winds, in the marine region actually for the last three days,” said Ross Macdonald of Environment Canada.

Some passengers felt that some of the cancellations earlier in the day were unnecessary.”The weather was very clear at 11 o’clock so we were very confused about the safety. I don’t know what it looks like on the mainland of course,” said one frustrated bystander.

However BC Ferries says proper protocol was followed.

“The parameters for sailing cancellations haven’t changed, the factors that go into the decision are wind speed, wind direction, sea state and wave height. So those are the things we look at when having to cancel a sailing,” said BC Ferries Communications Manager Chelsea Carlson.

Monday morning BC Ferries plans to add additional sailings to help with the back log. 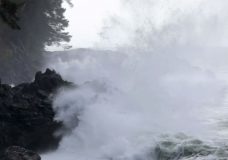 More than 20,000 customers without power on Vancouver Island 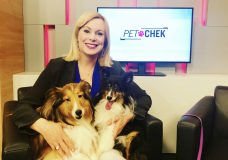