MEDICINE HAT, Alta. — A police force in southern Alberta is defending two officers who killed a severely injured deer with a knife to end its suffering.

The Medicine Hat Police Service said the officers were called Friday to a residential area, where they found the deer missing a leg. Two of its other legs were badly fractured, likely after being hit by a vehicle.

Police said the officers determined they couldn’t shoot the deer because they were too close to homes. They decided that using a knife was the safest way to quickly euthanize the animal.

Medicine Hat resident Denis Bagaric said he was driving to work when he saw the injured deer cross a road and curl up near the door of a house.

He said he couldn’t believe police used a knife on the animal.

Upset, he shot a video of the officers and posted it on social media.

“I thought he was going to pick up the deer and take it to a field or let a vet deal with him,” Bagaric said. “But to whip out a knife and start stabbing it? I think that’s disgusting.”

Police said they are aware of the video and agree it is disturbing but stand by the officers.

“The MHPS supports the actions of the involved officers, who took the matter very seriously and attempted to mitigate the trauma to the injured deer and the public as much as possible,” the police service said in a statement.

Police said the officers tried to warn people in the neighbourhood before they killed the deer. (CHAT News Today, CTV Calgary)

You're out! A list of federal election candidates forced to step down, resign 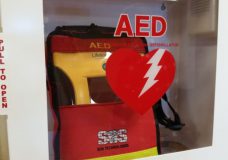